Company Provides Awards as Part of Focus on Materials Design for a Better World CLINTON, Tenn., May 4, 2015 – Techmer… 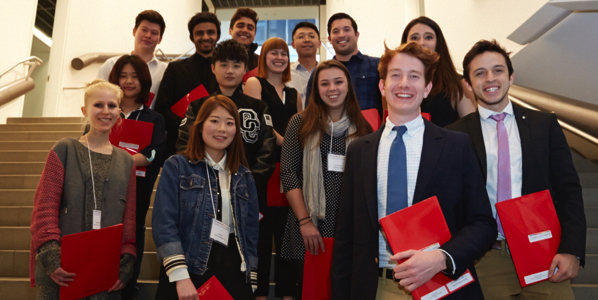 CLINTON, Tenn., May 4, 2015 – Techmer PM, a leading producer of value-added colors and additives for the plastics and fiber industries, is pleased to recognize the recipients of six prominent design awards sponsored by the company as part of the Royal Society of Arts United States (RSA-US) Student Design Awards (SDA). Held April 25 at the Cooper Union for the Advancement for Science and Art in New York City, the 2015 program’s finalist submissions comprised 23 projects from a collective 36 students representing eight different universities.

The Bill Moggridge Award for Interdisciplinary Design is among the awards funded by Techmer PM, given this year to Keshev Ramaswami of the Pratt Institute for his project EXOL[L]NEA. The award, which is named in honor of the late William Grant “Bill” Moggridge (IDEO founder, design visionary, and former SDA winner), was introduced by Alex Moggridge, Bill’s son, and presented by Richard Clarke, global vice president of design at NIKE, Inc.

Richard Clarke and other former RSA winners were in attendance at the event. Clarke, who won his award while at Berkshire School of Art and Design, gave the keynote speech and credited the award with “changing his life.” He encouraged student designers to “look for the companies that dare to dream with you.”

The RSA-US Student Design Awards, which seeks to inspire collaborative, multidisciplinary, design-led social change, will celebrate its 90th anniversary this year in the United Kingdom, while the U.S. program is in its third year. Both the U.S. and U.K. programs are open to undergraduate students currently enrolled in colleges and universities. Techmer PM is a founding sponsor of the RSA’s Student Design Awards in the United States.

“We are excited to support these talented and inspiring students and recognize them for their fresh, creative, thought-provoking design work,” said David Turner, Techmer PM vice president and 2015 SDA chairman. “Techmer PM is honored to be a part of this program and to support the RSA in the United States.”

Over 1,500 people participated in the 2015 RSA-US Student Design Awards through attendance, live webstreaming, and social media.

About Techmer PM
Techmer PM is a major producer of value-added masterbatch and engineered compounds for the plastics and fiber industries. The company manufactures and sells masterbatch under its Techmer PM brand and engineered thermoplastic compounds through its Techmer ES subsidiary. The company has worldwide manufacturing capabilities focusing on high-performance applications where quality, technical support, and problem solving are critical. Techmer PM was recognized by Plastics News on its “Best Places to Work 2014” list. Learn more by visiting techmerpm.com